View source
watch 01:54
Obi-Wan Finale - The Loop
Do you like this video?
Play Sound

Kent (He/Him) is one of two new additions (introduced in Season 9) to the Rivals of Waterdeep. More will be added to this article as the Rivals come to know him better. 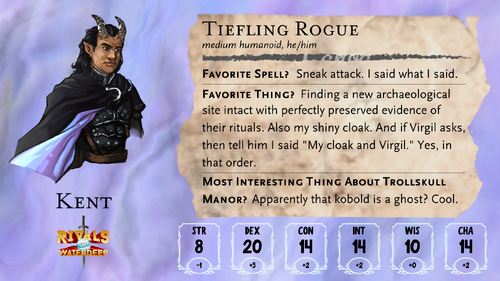 Tall, brown skinned with hints of blue, shoulder-length black hair, ice blue eyes, two horns with stylized metallic inlays. Kent wears primarily black and dark clothing and armor, but the inside of his cloak is famously quite showy.

Excitable, opinionated, and extra. He is apparently fascinated by archaeological sites, Duo the "ghost" kobold, and the dynamic emerging between Selise and Shaka.

Little is known at this point about Kent other than the following:

Kent is currently in a relationship with Virgil, another newly introduced member of the Rivals.

"Virgil, we're never leaving." - Kent after he was offered a spare room at Trollskull Manor just to keep his stuff in

"VIRGIL! … Where's my traveling tunic?! Not the gray one, the brown one. It's gonna be dusty!"

Community content is available under CC-BY-SA unless otherwise noted.
Advertisement