Virgil (he/him) is one of two new additions (introduced in Season 9) to the Rivals of Waterdeep. More will be added to this article as the Rivals come to know him better. 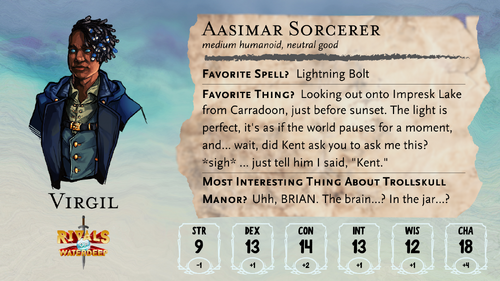 Tall, with dark brown skin, medium length black dreadlocks with silver colored tips (locs with an undercut) and the odd silver and blue hair cuffs sweep to the left over his head. His eyes are a pupil-less pale blue-gray. He wears a dark blue hooded coat over a gray vest and black suspender harness.

Friendly, but calm and reserved. He trusts Selise, but is wary of just how true the tales of the Rivals are turning out to be. Brian the Brain still gives him pause.

Little is known at this point about Virgil other than the following:

Virgil is currently in a relationship with Kent, another newly introduced member of the Rivals.

"I don't want to be the first down [to breakfast], but we won't be the last down either." - Virgil, to Kent when asked for more time to sleep in. 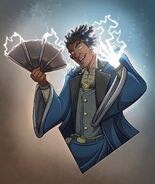